From MiOS
Jump to: navigation, search

Polling is the process where Vera requests information from a Z-Wave device about its current status, such as on/off, dim level, temperature, and so on.


Depending on the device, polling may not be necessary, as the device will report any status changes to Vera autonomously. Those devices are not normally polled, but only when Vera starts up. These are devices that support associations, such as a Leviton dimmer.

Other devices, such as many battery operated sensors for example, will be in a low-power state most of the time and therefore are not listening to the network and cannot be polled at all. An example would be a portable controller, such as the GE 45601. Another example is a motion sensor, such as the HSM100; it will autonomously report motion to Vera, but cannot be polled for temperature and light level readings until it 'wakes up' and notifies Vera that it is awake. However, frequently listening, but battery operated devices such as a door lock can be polled.


The polling mechanism and the parameters that control it are described below.

The highlighted section in this screenshot shows the poll settings for the entire system. They apply to all devices, unless specified differently for a specific device. 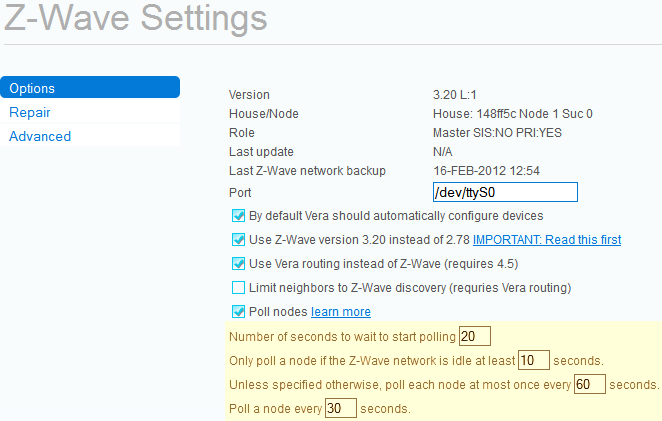 The highlighted section in the screenshot below shows the poll settings per device.

If polling is enabled 1, Vera will begin polling when the Luup engine has restarted and the specified wait time 2 has elapsed.

The nodes are polled in sequence, starting with the lowest device number. The Z-Wave network must have been idle for the specified time 3, before the node is polled.

Once the node has been polled successfully, Vera waits the specified number of seconds 5 before polling the next node.

After all the nodes have been polled, the process repeats, taking into account the maximum poll rate 4/6 for each device.

Devices that report their status autonomously and battery-operated devices that do no listen are skipped by default during normal operation.

The actual poll rate per device depends on the size of the network and the type of devices in it.